We are a group of 15 undergraduate students and two instructors of a History/Geography upper-level undergraduate course at the University of Regina, in Saskatchewan, Canada.

Throughout two weeks in May 2015 we will use this blog to document our experiences and impressions of our stay in Berlin, Germany. The preparatory course in Regina and the field trip to Berlin will immerse us in the urban development of Berlin since industrialization in the second half of the 19th century. We will experience some of the most important aspects of modern European urbanization. The course investigates the ways in which a major European city has developed in terms of its physical geography, demographic changes and urban planning. We shall pay close attention to Berlin's historical, social, and cultural development.

Discontinuity, disruption and destruction characterize the history of Berlin since rapid industrialization in the 19th century. The somewhat stodgy capital of Prussia developed into Europe's capital of industry, frantically trying to cope with a changing economy, a rising population and its demands on urban infrastructure. Politics and war changed the face of Berlin in the last century. These changes are still evident in today's city. Indeed, since the collapse of the Mauer, Berlin has once again undergone a dramatic transformation. During our time in the city we will attempt to understand the forces that have shaped Berlin and will try to evaluate the results.

Come back often and follow us on this exciting trip...


We are grateful for the support received from the University of Regina, the Faculty of Arts, and the German Academic Exchange Service (DAAD). 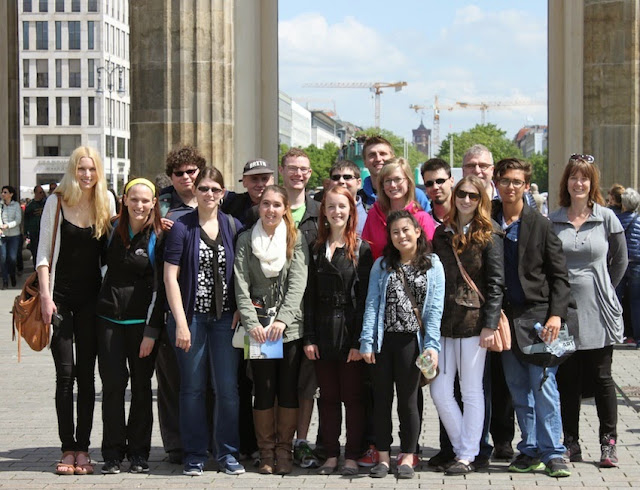 Our group in front of the Brandenburg Gate, May 2015. A constant companion in Berlin are the cranes in the background - they basically 'ruin' every picture...